THE WEB & CXXXVI - Ghost Of The Sea

2020 was a crazy year with that pandemic raging and the measures that had to be taken to prevent the health system from crashing. A year at home, basically; i worked in home office from march till end of the year. Could have thought this would have been perfect to produce a lot of tracks and videos, but somehow i missed the creativity boost... I preferred to go out and do a lot of walkies instead. However, there was a track that i had started a long time ago, and when Cat came up with the idea of starting another series of tracks, an EP dedicated to extinct animals, i finally resumed work on it. She told me the idea she had for the first track, it would be about Steller's sea cow, a huge sirenian that lived in the Bering Sea and went extinct some 250 years ago. 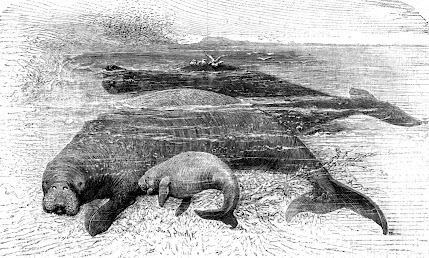 As i started that track on a 136 bpm grid, i decided something like an old school techno trance style would fit, with some bubbly or watery sounds and a swirling bassline popping in and out. I finished it and sent it over to Cat. She provided me her vocals, singing along the track and softening my rigid arrangement on the 8's and 16's. The result might be somewhat conventional. I'd say it's a pleasant track, with a lovely flow. But still got the WEB&CXXXVI stamp on it - some darkness and deepness, plus Cat's distinctive voice and way of singing.

The track was finished end of October 2020, and came up on Soundcloud and IndieMusicPeople. But of course, it needed the proper track video too. As always. Took a lot of work to fill the whole 8 and a half minutes with scenes that relate not only to the sound and mood, but also to the lyrics. Finally, just before Christmas, we finished it and could upload it on Youtube and Vimeo.

After completing "The Chexbres Trilogy Remixed" for Magnetfisch in Summer 2013, Cat (aka CXXXVI) and i decided to start a new series, producing it 'ping pong style' again as with the tracks of 10284 Miles, that is, she sends me a vocal song i do the music to it, next i send her a music track and she does the vocals for it. Another thing we made up is that the lyrics would rather be strange and funny, crazy stories, silly lines... or simply put: wtf aka "what the f++k?" . And that's it. As for the rest: anything goes...

End of August 2013 Cat started with a song inspired by the children's picture book "There's a Wocket in my Pocket!" by Dr. Seuss (Theodor Seuss Geisel), hence the track title Zeuzz. For the music i tried to keep it raw with a strong rhythm, and using a 6/8 signature covered by a 4/4 beat so there's 'fake tempo changes' in it (check it at the 2:46 mark of the track). A friend on YT commented that the track reminded him of Leftfield...and this is no coincidence, as Leftfield's 'Double Flash' is one of my fav tracks and indeed i got inspiration from it for the sound of that heavy beat pattern. The video goes with the style of Seuss' book.

Next up is Aligel which can be said is one of our biggest hits on YT (together with Silicon from 10284 Miles). Here i provided Cat with a deep dubby tech house like track that inspired her for doing the perfect lyrics and instead of singing in her typical bluesy style she tried to do the singing half spoken word style, which fits the track perfectly and makes it a hallmark. For the video we did some shots together when Cat was visiting me in autumn 2013. The fab duo as black and a white ghosts in the forest, and as black and white angels too...

The third track follwed in February 2014. Cat did a cool song about someone that has had a brain transplant. She entitled the song Brian. The song is big fun and has a lot of crazy ideas and funny lines in it, it always makes me smile when i listen to it. For the music i got inspired by the progressive techno tracks of Underworld, with slowly adding more and more sounds and layers towards the end and keeping a certain haunted mood with the melodies and harmonies. I also used samples from my old tape where i had recorded sounds of the Roland MS 10 i had once (see monoton series) and added some effects that would fit the story and lyrics of Cat's song. The video goes with the story and the lyrics of the song as well - don't miss it, it's a nice crazy package :)
This track was a quite a success on the US-based small independent platform IACmusic.com (relaunched and renamed to IndieMusicPeople.com), when i uploaded it there it climbed up the 'Most Popular Songs Last 48 Hours' list till it reached the top on February 26th 2014.

It took a while until we were able to work on the fourth track. I had been working on a track for quite a while, when in winter 2014/2015 i tried to finish the work on it and use it as the next ping for our WTF series. As on 8th of January 2015 it was Elvis Presley's 80th birthday, this inspired Cat for the Lyrics to the track, it's called Grasslands. The track is rich in sound, melodies and harmonies, and Cat's vocals add the right bluesy touch to it.
Grasslands brought a lot of attention to the guys running the IACmusic internet radio station (now IndieMusicPeople.com), and it was featured not only on their official Electronic radio station, but also on their Blues radio station... as of now (November 2015), the track is still on the playlist of the Electronic station and it is still listed as second one on the Blues station ..."a selection of the top blues tracks on IAC" - what an honour! :)


We were both quite busy in Real Life so it took a while till we were both up for working on a new track, it was already summer 2015. It was up to Cat again to send me a song for track number five, called 063 - if these digits were on a calculator and you turn it upside down you would read 'ego'...but no, you can't calculate your life, sometimes your ego lies at you... The music here is a rather stripped down rhythm track, an electro industral cross over thing, with calculator sound samples and a synth line that might remind you a bit on Kraftwerk. As in Zeuzz there is some 'fake tempo change' in intro and breaks as i used a 12/8 signature that gets covered with a 4/4 beat. For the video Cat provided lots of cool shots of old calculators, and again there's some of our silly stop motion animations in it too, where we popped a lot of balloons. was great fun to work on this.

A long break followed. It was my turn to create the music for the next track but i suffered some kind of creative block. Finally in summer 2016, after i did 'Universum', i used the momentum to create the sound for a new FTW track. I used a 4/4 grid, but built it up with 6/4 patterns, this allowed a 'fake tempo switch' of the heavy bass drum after a slow paced intro, while keeping the synth patterns, bassline etc. Also i added a distorted howling lead synth melody for a hallmark (or kind of climax) part in the 'slow' and and again in the 'faster' section. I sent the music to Cat who added her unique vocal interpretation and great lyrics to tie it all together and give it the right dark and trippy WEB&CXXXVI twist: Only The Rich Get Colour. We tried to mirror this in the video too, using black and white scenes as well as very colorful scenes - just insert a coin and switch on the colours...

Dark, dank, eerie and strange. That is what makes this music so much fun to review. Very cool textures and sonic syllables. I like the way you put the understated vocals in rhythmic syncopation correlating with the masterful electronic suprises. Cool drums and a very interesting soundscape. This wreaks of all the cooler elements of house, trance and techno. Great Work! (Stoneman, IndieMusicPeople)

More time passed....We were both hamsterwheeling in Real Life and creativity was having one long nap. The years switched to 2018 when Cat sent me a song that would be perfect to add to the WTF series as a closing track. It was a giant. ....a giant weevil. For this track i wanted Cat's vocals to take the lead and carry the song, so i went with a rather simple but solid backbone. Dark drumpatterns that have different metrics, on a rather soft and heavy bassdrum with simple but scratchy hats, combining with a slightly morphing bassline pattern to be the principal rhythm section; voice-like slightly gurgling pads for a dreamy and maybe also bit spooky vibe; synth stabs as arpeggio element to season the whole thing.
As always, we put a lot of effort into the track video, to fit the sound and the lyrics - Ride them weevils! 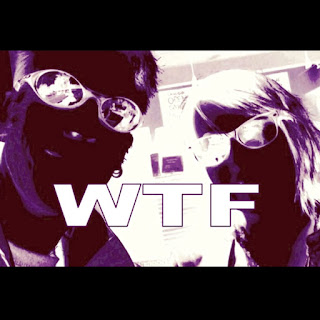 Click on title below to listen to the track on Soundcloud