THE WEB - The monoton Water Suite

First i had no idea what it should be. But when i came about playing around with these „Korg MS-10 drum sounds“ from monoton X and monoton rem X a little bit i felt like building yet another track with them. I especially liked the drop like sounds, so i wanted to modify and use them extensively - pictures of water appeared in my head and i began to work on an „electronic water track“. How obvious to change the working title „monoton Z“ to Electric Water.
I completed this track and used the basis for yet another track. i was in a flow... underwater... submarines... – yes! sonar sounds are cool! they have to come in too;  and „monoton T“ became Submarine. After dark there must be light, so i came to a correspondig alternative version of Submarine: Dubmarine. In this track, light (dur) changes into dark (moll) and vice versa.

Since these tracks are similar in their sound, theme etc. i came to the idea of coupling them together as one underwater space techno opera, and what was missing was a closing track. It was clear that after all this driving sharp beats it would have to be something smooth and downtempo. I called this track Heartbeat of Poseidon. ...it’s becoming quite obvious when you listen to it;-) The monoton Water Suite was completed. But because i liked the drum only part in the middle of Heartbeat of Poseidon so much and wanted to use it at higher speed too, i transformed the downtempo track to Poseidon Highway and added it to the album.

Note that for these tracks, not a single drummachine sound was used. All drum sounds are  sounds sampled from a Korg MS-10 and modified as needed. 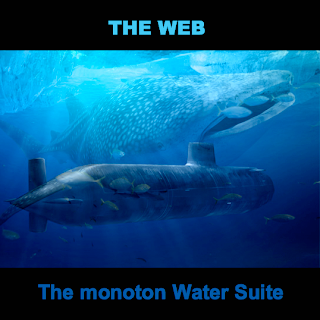