Wasn't long after i had started my YouTube-Channel that i came about a clip from user TheLuigiPop. I checked out some more on his channel and i thought wow, that's some cool artsy stuff he is doing, the combination of sound and the footage he used and edited always was a great experience. In fact, he is among those that inspired me to do music videoclips too... Meanwhile, Lu aka Dr. Griffin had a second (theluigipop2) 2and now a third cannel (Iminvisiblemen). He is regularily doing clips for tracks from the nice netlabel DAST Net Recordings 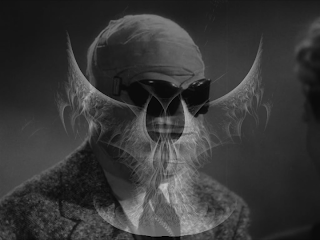 As Lu also liked my tracks he once asked me if i could do a remix of a track from one of his friends from DAST. The track was called "The Luigi Pop TV". The idea was that i will do a remix and he will do a cool videoclip for it on YouTube. And so i did. And so he did - he used footage from a very old b/w flick about hell, maybe Dante's Inferno or what... Soon after we repeated this audio/video-collab with "Darkwhite", a track from Benjamin Strehm, German producer and DAST co-founder. The video from Lu fits tight - apocalyptic romance...
At that time, November 2011, Cat (aka CXXXVI) and i were still working on our 10284 Miles album. The two remixes that i did for the collab with Lu got the attention from the DAST guys, Ben Strehm and Stas Dauer, and that's finally what gave me me the opportunity to remix Funke7's Days Of Orange Sunshine together with Cat, plus do a number of other collabs with DAST (see later post ...)

One month later we did another a/v collab, as Lu had asked me to do a remix of Daegon's "Magic Eyes" which is one of his all-time favourite tracks. He edited a fantastic clip to it with footage from David Lynch's Eraserhead. unfortunately the video on YouTube is now blocked...(copyright hell ;)
After a long break, in which Lu had not been up often on YouTube, we decided to do another collab, and i picked another track from Daegon to remix, "They Have Arrived". After a computer crash and several weeks time Lu came back with an awesome clip for the remix.

You can listen the tracks on SC and download them. Anyway, don't forget to check out the cool clips below!